Hello everyone. Hope you are all well and hanging in there. During our quiet Thanksgiving dinner our kids asked us about growing up in the” olden days” My husband and I both laughed. We told them we had it good compared to our parents. My husband started to tell them about their grandfather. Andrew Coleman Senior.

At the age of 17 my father and two friends cycled 18 miles to meet a British employment agent as England had a big Manpower shortage at that time. He signed up under his deceased brothers name in order to meet the age requirements and in the event of being drafted into the British army he could easily disappear without trace. To his mother’s displeasure he departed by ferry bound for the UK. He spoke about the ferry stopping midway to set off flares as the Germans were bombing London that night. Upon arrival he was bussed to a steel mill in Scunthorpe  Knowing that he didn’t want to work there and having been mistakenly given his full work permit he noticed a side door open after orientation.

He slipped out the door and jumped on the first bus he saw which was headed for Birmingham. Arriving there he found temporary work at a chocolate factory and found cheap accommodation. In those days part of your suitcase kit was a delouse as accommodations were not clean back then. Packed lunch was bread and jam today and bread and tomatoes tomorrow. While playing darts one night he befriended a British soldier and worked out a deal to buy American “rations” from him. He was warned to dispose of the packaging as the soldier would suffer the consequences. Each night he would dig a hole and bury the evidence. He then got a job at Dunlop tire factory for three years and sent five Pounds to Ireland each week. Conditions were unhealthy at the Factory so he got a job in Gloucestershire as a pipefitter running gas and water lines. This required that he travel with the job thus living in a caravan for six years!

Hearing great stories of Canada he once again headed into the unknown but under his real name this time! Arriving early morning in bitter cold Montreal he went to a café to warm up. Hearing a familiar accent he approached a railroad worker to find work. The reply was “every man for himself in this country”!

Undeterred he found work at the Uranium mines as a pipefitter. He was out in the “sticks” with the nearest highway 35 miles away and an abundance of snow. On occasion he would visit his brother who was a Canadian Airforce pilot. After 3 years it was time for another adventure.

In 1958 he contacted very kind neighbors from Ireland who were living in Chicago. They were able to sponsor him in and he got his citizenship. His first job was waxing floors for Sears at 99 cents per hour. The main navigation spot was the pub so he frequented it regularly to further his career! There he met a couple of Donegal men who took him under their wing. He would visit them at their houses at weekends to serve an unofficial apprenticeship as an Ironworker. After a number of months he went to the Union hall and paid a “kicker” fee to join. Sided with his Donegal friends he learned the trade fast and became a foreman for Gateway Construction.  He worked on Marina towers and Lake Point towers to name a few. The last load of steel landed on the deck before lunch always held a pleasant surprise of several cases of ice cold beer for noon.  Those buildings still stand today so Guinness does give you strength!

Attending a wedding one time he was introduced to my Mom. She asked for a lift home that night under the presence that she wanted to get away from an annoying suitor. The rest was history and he met the fate of all good men… marriage! She worked as a supervisor for Webcor Electronics. They soon bought a two-flat at Long and North Ave. Two babies later and Irish accents at every corner in the neighborhood they were now living the American dream with a hint of Ireland.

Then the bittersweet letter came from My Grandfather stating that my Dad was the chosen son of twelve in family to inherit the marshlands in Roscommon. The decision was made to leave the promise land and return to the Emerald Isle. They had a house built beforehand and he bought the first tractor in the village. He worked long hours on hire cutting meadows, hauling turf, bringing cattle to the market etc.

Life was very much different living in rural Ireland compared to a bustling city. High points in the year were Fair Days and visitors from abroad at Christmas, Easter and summer along with those dreaded packages of used clothes from America. The look of shock when a pair of outdated check pants were taken out and mother’s words “those will fit you perfect”!! I grew up listening to the romantic Chicago stories and truth be known my mother’s heart was left behind in the Windy City. When leaving Ireland after a vacation she would hug me with a tear in her eye and whisper “Don’t ever move home”…He Didn’t he met me!

I think our children have a better understanding of the sacrifices that were made long before they were born. I hope you enjoyed my husband’s story maybe there might be a part two .We just want to wish you lots health and happiness in the coming New Year. 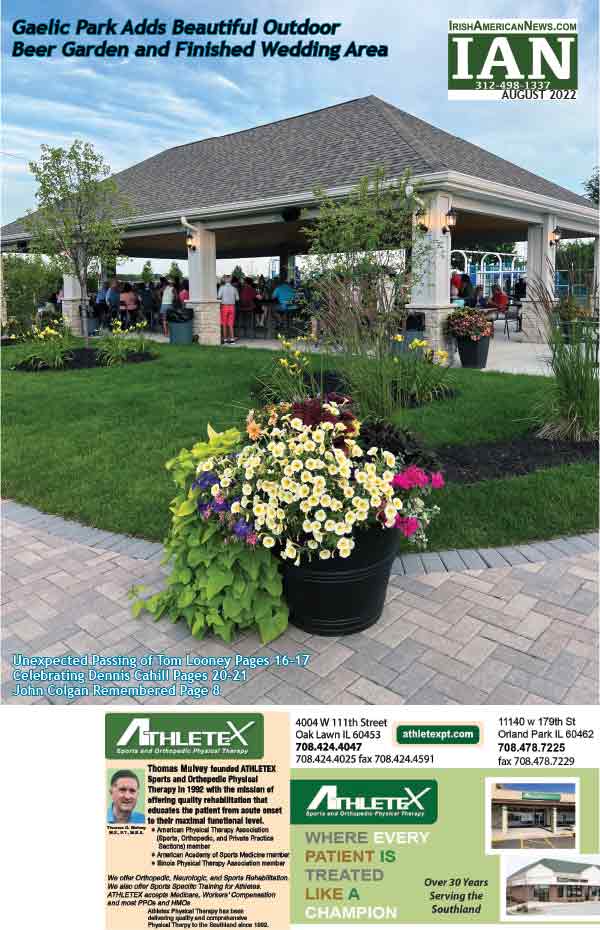