April 1971. Fifty years ago. My design for a commemorative Waterford® Crystal celebrating the first trade fair between Ireland and Minnesota had been selected earlier, in 1970, as the prize winner in a competition. The competition had only been open to Minneapolis School of Art (MCAD, Minneapolis College of Art & Design) students.

I was a student there for my first two years of college, 1968-1970, honored and grateful to have received a scholarship to attend the school. Of note, Nancy Rice, Joe Duffy, and others who would also go on to become leaders in the field, were among the talented students at the Minneapolis School of Art (MCAD) around that time.

The prize was an all-expense-paid trip to Ireland mainly to visit the Waterford® Crystal factory in Waterford, Ireland, to meet with the Chief Designer and engravers there, to see how Waterford® Crystal was made, and, to experience Ireland as an honored visitor. The competition was co-sponsored by the Minneapolis School of Art (MCAD, Minneapolis College of Art & Design), Powers Department Store, and Ireland’s Córas Tráchtála, Trade Board in Irish, now known as Enterprise Ireland.

I was, of course, very grateful and proud to have been selected for this prize. This would be my first travel outside the United States, and it would be to my ancestral homeland. My dear father’s side of the family is of Irish Catholic descent. (Parenthetically, I had come from an ethnically “mixed
marriage” since my dear mother’s side of the family is of Italian, specifically Sicilian, Catholic descent.) Travel – expenses paid – to Ireland was a dream prize in itself for a young artist/designer.

And what a wonderful trip to Ireland it was! I recall being awestruck at the first sight of Ireland’s brilliant green countryside as my Aer Lingus® flight descended through the clouds while approaching Shannon Airport after crossing the Atlantic, having left behind still-cold, snow-covered Minnesota and the Midwest.

Flying on from Shannon to Dublin, I was welcomed at the airport by a distinguished looking gentleman in a bowler hat and black three-piece-suit, Percy Lovegrove, from Córas Tráchtála, accompanied by a uniformed chauffeur, a chauffeur who, as it turned out, I was told, was Ireland’s leading chauffeur, whowould drive me through the south of Ireland – in a Mercedes-Benz® limousine!

The visit to the Waterford® Crystal factory and offices was fascinating and the Kilkenny Design Workshops, inspiring, as were so many other places in Ireland, including, Dublin; Trinity College (where I saw the unforgettable “Book of Kells”); Dun Laoghaire; Glengariff (where I had my first poached salmon); Limerick area (home to some of my ancestors, such as the O’Brien’s); Wexford (where I crossed the “Redmond” bridge); Bunratty Castle (where I tasted mead for the first time and enjoyed a medieval feast); the countryside where on a beautiful, gusty, sunny-and-cloudy spring day, I watched a thundering horse race across the fields and around a festival-capped hillock; and, toward the end of my visit, the Ring of Kerry and Valentia Island, where looking off from atop a seaside cliff I could see the Skellig Islands (long before the latter were the major tourist attractions that they have become in recent years).

It was truly an honor to be awarded this prize for my artistic and design talent and, as a result, that I was able to have such a wonderful, memorable experience, an experience for which I will always be grateful. My family was proud.

Originally from Milwaukee, Wisconsin, and raised in West Allis, Wisconsin, I was fortunate to have attended [Pope] Pius XI Catholic High School, Milwaukee, with its excellent art program, and classes in the Children’s Art Program at the then Eero Saarinen-designed Milwaukee War Memorial-based Milwaukee Art Center (later known as the Milwaukee Art Museum), a mid-century modernist building overlooking Lake Michigan. I believe, these foundations – also including my education at the Minneapolis School of Art (MCAD) – and the support of my family and friends, in significant part, combined with my God-given talents, helped to make my achievements possible. I will be forever grateful.

Epilogue: The commemorative Waterford® Crystal I had provided the winning design for was donated to the Minneapolis Institute of Art, and, it was truly an honor to see, years later, in the collection catalog identification cards: “Glass”, “Crystal”, “Ireland”, and my name, “Patrick Michael Redmond.”

I will always remember this visit to Ireland, the trip and the first stunning sight of my verdant ancestral homeland as my flight came through the clouds. 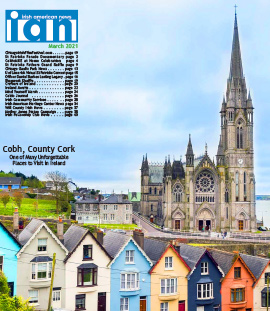