Prior to a Stanley Cup victory of the Chicago Blackhawks, Mayor Daley and Mayor Nutter of Philadelphia made a bet. They agreed to make a wager on the outcome of the Stanley Cup between the Blackhawks and the Flyers. Mayor Daley offered to provide an assortment of personally selected Chicago foods, drinks and other local products to be donated to charities in the city of Philadelphia. Among the items chosen to be donated was Mullen’s Chicago’s Finest Applesauce.

On October 16th 1996, the founder of Mullen’s applesauce, Chicago Police officer Jim Mullen and his partners were responding to a “shots fired” call. Within minutes Mullen would be shot in his face and immediately paralyzed from the neck down. Now, nearly 25 years later, Jim lives at his Chicago home with his wife (who is presently on the force) and their daughter, Maggie. Breathing through a ventilator and requiring 24 hour a day care, Mullen hasn’t wasted anytime focusing on his latest business venture-his applesauce.

“I was at Northwestern hospital for a heart scan and I met this technician and she started telling me about her family’s BBQ sauce. We were chatting for a while and that night I came home and bought a book on the internet about the food business. I started my company that night through the state of Illinois.” And others will benefit from his company, as a portion of the proceeds go to the Chicago Police Memorial fund--an organization dedicated to offering support and assistance to families of Chicago Police officers, injured or killed in the line of duty.

Mullen grew up in a household with a serious appreciation and love for great food. Jim recalls a childhood memory of sitting on his parents couch with apples and a potato peeler and seeing who could get the longest piece of the apple skin with a single peel. His mother, who was a fabulous cook, had many different recipes and dishes. People used to tell Mrs. Mullen that she should consider selling her different sauces and foods. So as a tongue in cheek kind of joke, Jim thought bottling her applesauce would be a nice tribute to her. Mullen, who has been eating the applesauce for forty-five years, admits that when he formed the company he lacked any grand vision. His only goal was to get the applesauce bottled and on the shelves at Happy Foods, the local market where his mom did her grocery shopping.

“When the first batch was made I was so proud of it, I was like Johnny Appleseed just giving it away to everyone. Once it ran out, family and friends starting asking me where the applesauce was and I told them there is no more! I just kind of bottled it to do it, but people were literally coming into my garage wanting to buy it. So, that’s really how it continued and how it all got started.” What began with the local market Happy Foods, Mullen’s applesauce is now available in approximately 160 different stores, including Jewel, Sunset Foods and Whole Foods. Mullen’s Chicago’s Finest is all natural and made with only real ingredients. In a couple months a sugar-free version will be available, and down the road possibly individual cups and a freeze-pop version of the delicious recipe. Its tagline says it’s “like apple pie without the crust” and I couldn’t agree more. Jim uses a voice recognition program to expand his business through e-mails and social networks. He also sends out samples and has done food shows and demonstrations, which has helped the business to grow little by little.

Jim is confident in his product and comforted by the fact that his mother, who recently passed away was too. “She’s given this little legacy her stamp of approval, because she stopped making it at home and would just go to Happy Foods to buy it.” It can be heated up and topped on ice cream, whatever you use the apple sauce for it will taste amazing. Jim’s dad mixes it up and puts it in his oatmeal.

Although Jim says he misses being a Chicago cop every day, he is a happy man and grateful to be where he is today. A portion of the profits raised go directly to the Chicago Police Memorial Fund, an organization Jims holds dear. Mullen has many ideas for the future, one of which is making a float for the St. Patrick’s’ Day parade where he can throw samples of Mullen’s Chicago’s Finest Applesauce out for the crowd to enjoy. “I have little ideas I dream about down the road, but I don’t know what the future holds.”

For more information on Jim and his apple sauce visit www.mullenfoods.com 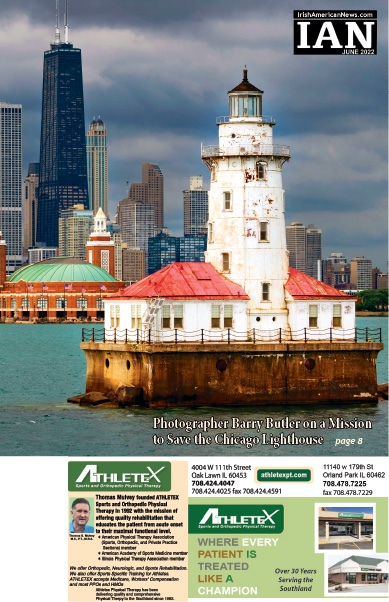