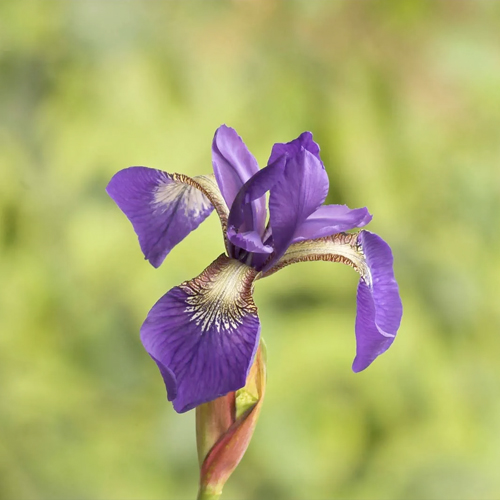 The Iris in the Field

(A Short Story by Rosemary, for Easter.)


(The original versions of this story were registered by the author at the U. S. Copyright Office in 2004, and 2005.)


It was a warm sunny spring morning when Rusty awoke from a blissful night's sleep.

As she climbed out of her bed, she noticed something very  different outside, from her bedroom window.

It looked like it was purple, and she had never seen it before.

She immediately got dressed, applied sunscreen to her delicate complexion,  and ran out of their suburban dwelling. She was determined to see what  it was.

To her surprise, she noticed it was an elegant iris flower.

As Rusty's curly carrot-red hair became brighter in the sunshine, her chubby freckled hands reached down to touch it.

She knew better than to pull the plant out of its natural habitat.

This only added to her enthusiasm, as she knew the onset of the springtime weather indicated that Easter would soon be approaching.

Rusty ran towards the house, to tell her family about it.

Once she arrived back, Rusty paused for a moment.

When she came inside, she immediately told her family.

"There is this really pretty flower outside," she announced.

"I would like to see it," her mom replied happily.

Okay, I will show you," Rusty stated, as she clasped her mother's hand, and anxiously pulled her towards this newest discovery.

"Oh Rusty, this is the most beautiful flower I have ever seen. It is so radiant just sitting here alone, why don't we just water it every day and allow nature to take its course," she suggested.

"I can take care of it myself" Rusty excitedly volunteered.

"Looking after of a living plant is different than playing with your toys," her mother cautioned.

"I promise to water it every day," Rusty pledged.

"Okay, it will be your responsibility," her mother declared tactfully.

Each day, Rusty filled her little pink gardening can up with water to nourish her flower.

Rusty's dad built a small white wooden fence with a pinkish trim, which surrounded her blossom.

"This is the prettiest fence in the whole world!" Rusty exclaimed, as she thanked her father.

A short time later, she created colorful illustrations and greeting cards of her iris flower.

Then one day on a Saturday morning Rusty did not see the usual color flickering through her window.

Rusty immediately dashed outside where she discovered that the lovely blossom was gone.

Rusty rushed back inside and cried.

"I know," her mother replied, and continued to speak with a comforting delivery.

"Perhaps a new one will grow," she stated.

"Rusty, there are times in our lives when we will experience disappointment, and harbor feelings of unhappiness in moments like this. However, we can acknowledge our letdown, but also be determined not to allow this to prevent us from experiencing future happiness," she thoughtfully explained.

"You will always have the pictures you created to remind yourself of it," her mother emphasized.

"As you grow older, the way you are feeling now will turn into blessed memories, that you will one day be able to reminiscence upon with your own children," her mom expressed with wisdom.

"Do you understand what I am trying to explain to you?" she asked.

"Sure," Rusty slowly nodded her head in acknowledgement.

As time passed, Rusty still felt disheartened when she thought about what she had lost.

However, she and her twin sister Janie were determined to continue with their arts and crafts in cheerful preparation for the upcoming Easter holiday.

Since the special day was going to be a little later in the spring that year, this provided additional time for them to complete everything.

They constructed dainty cardboard baskets, and painted Easter designs on them of bunnies, and flowers, in pastel colors.

Although their creations looked amateurishly designed, they had a certain charm.

Rusty also began to feel happy when she remembered the fulfillment, she had felt when she watered the flower. Taking care of it provided her with a feeling of accomplishment and responsibility. She began to embrace these pleasant recollections.

Then early on Easter morning, Rusty noticed a glimmer of colors sparkling
through her windowpane. She immediately leaped from her bed, and ventured
outdoors towards the array of hues, which awaited her.

When Rusty came back inside, she swiftly headed quietly towards her
sister's room and abruptly woke her up.

“What are you doing?” Janie asked annoyingly.

“There are tons of smaller iris flowers in the backyard!” Rusty whispered.

Both youngsters then looked out the window and were amazed.

They silently dashed through the door out back.

This time, there was an even larger mixture of irises, which enhanced the
area with their glory.

Their yard appeared to be an assortment of shimmering shades of purples.

Rusty scampered into the front door and veered towards the kitchen. She grabbed
some empty large paper bags which were from what their parents usually brought
home from the grocery market.

They went back outside and carefully placed their collection of flowers into
the paper sacks.

Instinctively, they both knew exactly what they intended to do with them.

Rusty then found one of her mother's gardening books which was easy to read
with big colorful pictures. She wanted to see how they should take care of them
properly.

They stored the iris flowers downstairs where it was a bit cooler, and began
to carefully follow the directions from the simplistic content and illustrations
the guide provided.

“Janie, why don’t we take the irises and place them into water. We can use those
smaller vases in the cupboard to fill them up. We should cut the stems with my safety
scissors, and then see if there are any packages left of that stuff mom uses to
keep the flowers fresh when she puts them into water. According to this book, they
should be put into the refrigerator for a few hours," Rusty stated.

"Yeah, I remember watching mommy do that. We need to get these in
water as soon as we can,” Janie warned in a childish manner.

She then added, "later, we can take them out and keep them in vases near
everything we made."

"It's a good thing that we had all those paints and stuff leftover from the
things we made for St. Patrick's Day," Rusty commented with relief.

After everything was securely placed into the old refrigerator in the
basement, which was empty but still in good working order, the twins
decided to go back upstairs and sleep for a while.

A few hours later, the sisters awakened and immediately got started on
their surprise.

They first stuffed their homemade decorative containers with all the handicrafts
they had completed for this big day and placed them in different areas downstairs.

The artistically crafted cartons were nicely designed, with shiny pastel
ribbons tied to the top of each one.

They then carefully removed the little vases from the fridge containing their
blossoms and placed them near each of the holiday pieces. They had been
mindful to only fill each vase with a few flowers, so they would not tip over.

The greeting cards Rusty made came in handy and were placed by each one.

A fancy bowl of colorful eggs which were completed a few days before,
remained in the upstairs refrigerator.

Shortly thereafter, their parents awoke to a startling but pleasant discovery.

The different blends of beautiful amethyst-colored highlights, were adorned
with a mixture of soft lavenders and various shades of purple.

“Girls, these things you made are adorable, and the flowers really add
a sparkle everywhere,” their mom complimented.

“Yes, I agree, and presume that more of your treasures grew in the backyard?”
their dad inquired.

“We noticed them earlier this morning, when the two of you were still sleeping,”
Janie explained.

"It appears your iris flower multiplied and grew back earlier than usual
in abundance," their dad joked, as he started to look for his camera.

When he found it, he turned to Rusty and Janie.

“Kids, I am going to take some pictures of all these stunning decorations.
Luckily, I bought some new rolls of film for my camera,” he mentioned
cheerfully.

“Thanks. I bought this extra film and was planning to take photographs
when we go out today for our celebration. However, I feel the exhibits the
twins made for us are more worthy of pictures,” their father stated proudly.

He then added, “besides if they didn’t involve real flowers, I would have
taken the photos of our outing today and purchased more film tomorrow when
the drug stores are open again. However, with flowers you never know
what they will look like the next day,” their dad assessed realistically as
he proceeded to get started.


The two sisters were looking forward to enjoying the rest of the day
celebrating this holiday with their parents.

Although they really liked what their folks had given them for Easter,
they were happier and prouder of what they had created themselves.


Rusty learned an important lesson that Easter about moving on
after experiencing a disappointment.

Both children also came to realize how homemade gifts can be more
meaningful than store-bought ones, as well as what you could accomplish
by using your imagination.