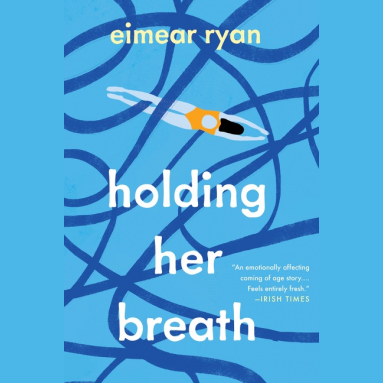 Eimear Ryan’s debut novel HOLDING HER BREATH has been shortlisted for the Irish Book Awards Newcomer of the Year Award, and received rave reviews from Irish and UK media, being called “Whip smart” (Sunday Telegraph), “Entirely fresh” (Irish Times), and “A refreshing, accomplished debut” (Irish Independent). I’m excited to be working on the U.S. publication this May 17, 2022.

Holding Her Breath is subtle, observant, and moving. It’s about swimming, ambition, complicated love stories, and family secrets—and a young woman coming fully into her powers.

When Beth Crowe starts university, she is shadowed by the ghost of her potential as a competitive swimmer: her Olympic dreams had been shattered after a breakdown.

Suddenly free to create a fresh identity for herself, Beth strikes up a friendship with her English major roommate and soon finds herself among a literary crowd—who happen to adore the poetry of Beth’s grandfather, Benjamin Crowe, who died tragically before she was born.

Beth’s mother and grandmother rarely talk about what happened to Ben, and Beth is unsettled to find that her classmates may know more about her own family history than she does.

As the year progresses, Beth embarks on a secret relationship with an older postdoctoral researcher—and on a quest to discover the truth about her family’s past.