Barleyjuice is a nationally known Celtic Rock band from the Philadelphia area.

Founder Kyf Brewer has been on the rock scene for over four decades, fronting the bands The Ravyns (MCA) and Company of Wolves (Polygram/Mercury), as well as recording four solo albums. His original Barleyjuice songs such as ‘Weekend Irish’, ‘What’s Up Yours?’, ‘Get Your Irish On’, ‘Celtic Girl’, and others have been featured in movies, TV shows & radio programs. His latest release, ‘The Old Speakeasy’,  features several former band members as special guests and was scheduled for release in 2020 before Covid held them back from touring with it. ‘The Old Speakeasy’ marks Barleyjuice’s 8th studio album produced and  recorded by Kyf Brewer, mixed & mastered by Cliff Hillis.

Long-awaited by fans, it was Kyf’s intention to recruit as many former members of Barleyjuice as possible for guest appearances. As fate would have it, current members actually changed as the tracks were being recorded.  Former featured band members include violinists Shelley Weiss & Billy Dominick, bassist Dennis Schocket, mandolinist Graham Ford, and guitarist Dave Woodworth, along with friends and family who had contributed over the years. Brewer’s daughter,  Scotlyn and wife Beth provided backing vocals on ‘Rose of Garden City’ and ‘High on Highland Life’, and daughter Remi plays the trumpet you hear on ‘Merry Queen of Scotch’.

“Barleyjuice brings a unique style of Celtic rock that has the audience on their feet.  Their style and rhythm is always a crowd pleaser.  Fast paced and energetic, they never disappoint.”~ Jayne Ann M. Recker, Executive Director Celtic Classic Festival Bethlehem PA

“This newest incarnation of Barleyjuice is even better - if that’s possible - than any formation I’ve seen from this act. They grab you by the eyes and ears and don’t let go.  Clearly, this group has their art down to an exact science, and we’re all the beneficiaries. Beyond that, they’re all just damned fine people. No ego, no muss, no fuss. As a listener and a promoter, you simply won’t find better.”~ Michael Coakley, Owner & Music Promoter, Weston Irish Festival, MO 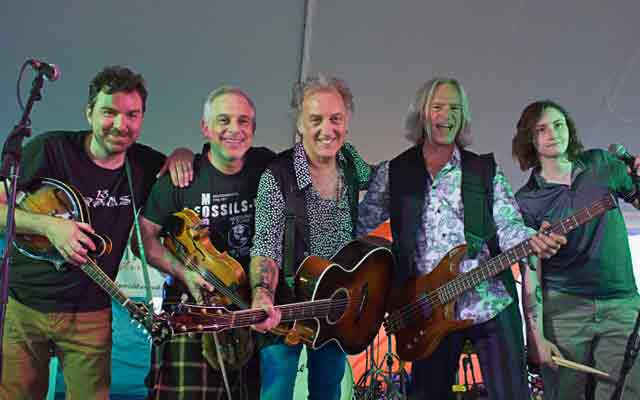 Song Descriptions:
The Old Speakeasy - Angry song about the evolving world losing its soul. The Old Speakeasy is this writer’s forgotten sanctuary.
Join the British Army - Barleyjuice rocked up traditional mash-up with Some Say the Devil is Dead. Explicit lyric.
High on Highland Life - A song of moving back to Scotland. We joked of titling it The MacArena!
Don’t Call Me a Pirate - Tongue-in-cheek dedication to the many “Captain Jack Sparrows” one encounters at Renaissance Festivals.
Rose of Garden City - Based on a true story of an American suitor asking an Irish girl’s father for his daughter’s hand in marriage. Immigrants settled in Garden City NY circa 1950.
A Fine Lass - Love song, guitar driven country crossover with a strong sing-along chorus.
Maggie May - Liverpool folk traditional, Barleyjuice skiffle style, Kyf & Graham Ford share vocals
State of Desiree - Guitar driven rocker about an emigrant Irish lad whose love mysteriously disappears passing through US security.
A Winter Toast - Likened to The Parting Glass, a final toast to good friends before leaving and facing the road ahead.
Merry Queen of Scotch - A raucous Irish-punker about the local lush who rules the bar and drinks all the young men under the table.
It Takes a Village (To Raise a Drunk) - A tribute to the great drunken poets, many of them Irish, and a musical lesson plan on how to achieve that revered status.
Crackin’ Jenny’s Teacup - Instrumental rocker in the style of Dropkick Murphys. The title dates back to a pirate term for spending the night in a brothel.
The Old Speakeasy (Return) - Reflective piece celebrating a return to lost old times. Dirge-like with mass harmonies and a bagpipe exodus.
Hail Ye Merry Maids - A wee single-verse ode to the lovely acquaintances across the globe who keep minstrels inspired.